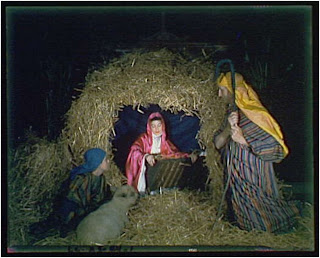 The date is December 24, 1223.  Those in the cave are members of the village of Greccio, in the region of Lazio, Italy, brought together for the first re-creation of the birth of Jesus Christ by a monk known as Francis from the town of Assisi.    On a clear cold night, shepherds could be seen keeping vigil over their flocks, while in a nearby cave a man and woman gaze upon a tiny figure lying in a manger.  In the cave with them are several townspeople who have come to pay homage to the new king.  A small shepherd boy, trying not to be a bother, stands on tipped toes and stretches his neck to look over Joseph’s shoulder in hopes of getting a glimpse. There are also a flute player, an artisan and blacksmith to name a few.   And there within plain view of the manger can be seen three great figures in royal attire, kings, all three on their knees bearing gifts.

The idea first came to him on the grassy hills outside of Greccio where it was quite common to see shepherds tending their flocks.  Francis often walked these hills watching this almost biblical scene and what he saw inspired him.  He would re-create a scene depicting the birth of Jesus Christ as a way of conveying the ideas of Christmas as well as promoting the Christmas spirit to an illiterate congregation. To do this, he recruited townspeople and had them dress in biblical garments and he placed them in and around the cave on the outskirts of the village. He also added farm animals for authenticity.  In the manger was a true-to-life wax figure of the infant Jesus.  It was truly a sight to behold, and the event stirred much curiosity and interest across the land. 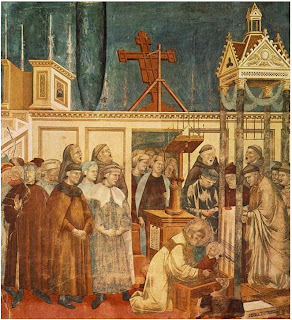 As the years passed, word of the nativity scene began to spread.  On Christmas Eve, families traveled far and wide to witness the spectacle. Over time, the nativity scene, or il presepio, as it is called in Italy, grew in popularity.  Other towns began featuring them and soon, people had individual nativity scenes in their homes by using wood-carved figurines.  Before long the Christmas nativity scene had spread throughout Western Europe.  As Catholicism flourished worldwide, so did the concept of the nativity.
Today in practically every country in the world, the nativity scene is used in the celebration of Christmas by Catholics and Protestants alike.  Children from one generation to the next attach themselves to these toy-like figurines and take pride in knowing the names of each character assembled around the manger.
And it all happened because a Franciscan Friar, by this simple act and a desire to teach, had set into motion a chain of events which created a phenomenon that even he would probably never have imagined.    BUON NATALE!


[Nativity scene: Library of Congress Digital Prints and Photographs Online at this link.