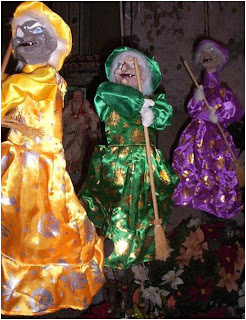 The celebration of Christmas in Italy begins on December 25th and lasts for twelve days, ending on Epiphany, January 6th. This concept is an absolute delight for Italian children who look forward to the secret visits of both gift givers: Babbo Natale for Natale and La Befana for Epifania.  As a matter of fact, the mere mention of the word Epifania goes hand in hand with the concept of La Befana and visions of an old witch riding around on a broom.

La Befana, was a senior citizen who was never without her broom.  At first, she was thought to be an evil witch, but no one actually knew why.  It was no secret that Befana spent much of her time cooking and cleaning in her little house.  And as she worked she sang, but when she sang her vocal cords released the most hideous screech ever heard by the human ear.  So terrible was the sound of her voice that the townspeople shuttered their doors and windows at the mere hint of being entertained by Befana.   However, no one could remember Befana doing anything wrong, except singing, so it seemed unfair to say that she was evil just because she sang.  Besides, she was Italian, and that’s what Italians do.  Eventually, society had undergone a change of attitude and rethought the concept of Befana from one of evil to one of good.  While this was happening, the story of Befana also acquired different versions.  Her story had changed over the years, having been told and retold by so many different story tellers.   Each story teller had his or her own personal way of telling it.    And so, the legend grew with diverse regional word-of-mouth interpretations from one generation to another resulting in variations on a theme.
All versions, however, seemed to narrate a basic account of a simple woman who, on a clear evening, observed an unusually brilliant star in the heavens.  So bright, in fact, was the star, that Befana felt almost troubled by the sight of it and a bit concerned about its possible meaning.   She, of course, went back to her housework and tried not to think about the star, unaware that momentarily, she would encounter three wise men.  Suddenly, there came a knock. Upon answering the door, there on her door step stood an imposing trio complete with a procession of camels loaded down with gifts.
The wise men, quite radiant in appearance but humble in manner, asked for food and lodging for the night and told how the great star was guiding them in their journey toward the town of Bethlehem where it was foretold that they would find the Christ Child. Befana obliged the travelers by sharing her food and humble home with them, but admitted that she had never heard of a place called Bethlehem.
The next day, as the wise men prepared to depart they spoke again of their quest to pay homage to the Christ Child and invited Befana to accompany them.   Befana, somewhat embarrassed, declined the invitation, saying that she had no gift to offer the child, but her regal guests assured her that no gift was necessary and told her that the newly born king simply came into the world to make it a better place.  Befana was undecided and for the longest time, could not make up her mind.  Alas, the wise men could wait no longer. They finally took their leave and resumed their journey.
Before too long, Befana had misgivings about declining the invitation. She decided to make a doll and bake some biscotti to take as gifts.  Then she followed the path taken by the wise men in hopes of catching up with them.  She ran and ran but could not find the way.  She ran so fast that she took flight on her broom. She flew all night but could find neither the journeymen nor the Christ Child. When she returned to her little house, she vowed never to give up trying to find the Christ Child and every year she flies around looking for the spirit of Christ in every child and leaves something for the children of Italy on the twelfth day of Christmas.  It is said that Befana forgets no one for she brings toys and treats for good little boys and girls and a shiny lump of coal for the questionable ones.
Merry Belated Christmas!    Buon Natale in Ritardo!


[image from Wikipedia at this link]
Posted by Salvatore DiVita
Email ThisBlogThis!Share to TwitterShare to FacebookShare to Pinterest
Labels: History, Italy