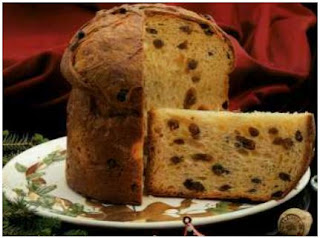 Il panettone has probably been credited with providing more enjoyment and gratification than any other single holiday treat. It is a Christmas pleasantry, unique in quality known to grace any breakfast or dinner table. In tracing the origin of the panettone, all evidence seems to lead to the City of Milan, Italy. The panettone can clearly be seen in a 16th century painting by Pieter Bruegel, but the first evidence of the panettone being associated with Christmas was found in the 18th century writings of Pietro Verri, a notable Milanese scholar and writer, who referred to it as pane de tono or bread of luxury.
The oldest recorded reference to anything resembling cake-like bread, dates back to the Roman Empire. It is said that the Roman recipe for a kind of sweetened bread included honey, pomegranate seeds, pine nuts, and raisins mixed with barley mash and may have been the closest thing resembling today’s fruitcake.
Like the Romans, many countries around the world have produced similar types of baked treats with mixed results and somehow, their production seemed to gravitate toward the Christmas season. One explanation of this phenomenon seems to suggest that with the heat of the summer gone, it was time to fire up the ovens and to make use of dried and preserved fruits and nuts harvested during the fall season. These ingredients were added into the dough mix and, depending on the baker’s choice, molasses, honey or some kind of liquor was included to enhance its desirability. Some were light, some dark, some crumbly and moist, others sticky and wet while still others were spongy or heavy. They were leavened or unleavened, shaped round, square or oblong. This being done at a time approaching the holiday season, should leave no doubt in anyone’s mind as to why it might be referred to as a Christmas cake. All the cakes seemed wonderful in their own way, but not suitable to every taste. Like many fruitcakes today, they were heavy.
The lighter panettone was achieved by searching for something different. The recipe for panettone had undergone numerous experiments throughout the centuries by bakers seeking to shy away from heaviness. As time went on, the culinary pioneers stumbled upon something unique. They discovered that if they allowed the dough to rise, not once, but several times (or for at least 20 hours) before baking, they would be able to achieve a remarkably different product. Their patience paid off. Complete with yeast, butter, eggs, raisins, and candied lemon and orange peels, what finally emerged from the oven was a dome-shaped cake like bread which possessed the light-textured quality we enjoy today.
Bakers, for the most part, are made up of risk-takers, constantly seeking to improve by asking themselves, “What if?” and then pushing their skills to the next level. By being careful to maintain the technique, they were able to make a variety of different kinds of panettone. In the 19th century, for example, panettone served as il simbolo della libertà (the symbol of liberty) when ingredients including red candied cherries and green colored citron were added to the white dough to create the colors of green, white and red of the Italian flag.
This cake-like bread has become world famous and, over time, synonymous with Christmas. Many look upon it as a blessing, for with so many foods to tempt us during the holiday season, it’s nice to know that among the many heavy, sweet holiday treats out there, we can still afford to enjoy a slice or two of the light-textured quality treat we’ve come to know as panettone with a minimum of guilt.           Buon Natale!

[image from Wikipedia by Codice 1000 at
http://en.wikipedia.org/wiki/File:Panettone_vero.jpg ]
Posted by Salvatore DiVita
Email ThisBlogThis!Share to TwitterShare to FacebookShare to Pinterest
Labels: History, Italy