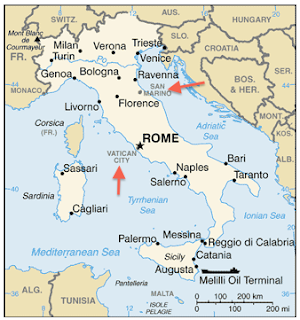 Italy is truly the land of enchantment and the world-famous producer of architects, scientists, navigators, explorers, poets, playwrights, artists, musicians, composers, master vintners and masters of the culinary arts.  However, the Italian peninsula is also a phenomenon in and of itself.   Many people are surprised to learn that the peninsula is comprised of three separate countries.  Within the country Italy there exist the countries of San Marino and Vatican City.
Near the end of the Middle Ages and at the beginning of the Italian Renaissance there existed approximately 250 city states.  Italy was different from other countries such as France or England which had strong central governments. Essentially, these city-states were considered independent countries which governed themselves and competed against one another for land and power through the use of armies and mercenaries. 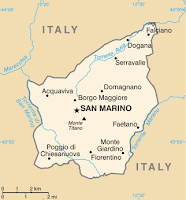 San Marino is believed to have been founded about 350 AD and had the good fortune to stay out of wars and feuds.  It has survived attacks from other city-states, the Napoleonic Wars, the unification of Italy, and two world wars.  San Marino is the oldest republic in the world and became part of the United Nations in 1992.    Since it is one-tenth the size of New York City, one might want to use a good magnifying glass to search for it on a map.  You’ll find it tucked between the regions of Emilia-Romagna and Marche, a short distance inland of the Adriatic Sea. 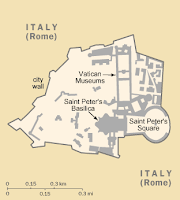 You’ll find Vatican City along the Tiber River in the city of Rome, which seems to be the strangest phenomenon of all, since it is a country within a city. If San Marino’s claim to fame is being the world’s oldest republic, Vatican City’s claim to fame is said to be the world’s smallest country.  Emperor Constantine, after officially recognizing Christianity with the Edict of Milan in 313 AD, began construction of a great church in 324 AD.  However, it wasn’t until February 11, 1929 with the signing of the Lateran Treaty between the Holy See and the Italian Government that the Vatican became a separate country.   So, don’t try mailing a postcard from Vatican City using Italian stamps or vice-versa.  It simply won’t work.
And of course, our third country is Italy, a land diverse in its various regional customs, dialects and dishes.  It is also a land of archeological discoveries, yielding a treasure-trove of many cultures down through the ages and revealing a long history for the world to contemplate.