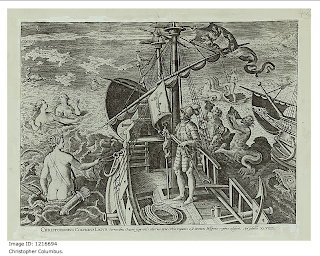 “Away in 1492, Columbus sailed the ocean blue.” It’s just a simple rhyme which helped countless numbers of school children remember the date of a great event. Columbus did indeed sail the ocean blue and did so in search of a new route to India. Columbus and his crew sailed westward. The story is well-known how they feared for their lives. They were sailing into the unknown and with the unknown came fear and with fear came panic. Tales of horror abounded in great number: tales of sea serpents and giant squids which could, with little or no effort, crush their ships into tiny slivers. And there was the constant fear of coming upon the ocean’s edge and unyielding currents with power to draw their helpless ships toward a great waterfall over which they would disappear into oblivion. All of these were, of course, monsters of their own making but when coupled with the unknown and the monotony of sailing the ocean for so long without sighting land, their fears intensified.
The sailors were steadily losing confidence in Columbus. Their water supply was getting low and their rations were at the barest minimum. They harbored thoughts of turning back. Turning back seemed less frightening since they would be traversing the same waters they had sailed before and they would be sailing away from the dreaded giant waterfall which would surely kill them all.
An atmosphere of mutiny was beginning to take hold and hovered above the tiny ships like as dark cloud, about to become a reality when suddenly talk of mutiny gave way to shouts of “Terra Firma.” “Terra firma,” came the shout once more. And there, way off in the distance, almost hidden beyond a horizontal haze, lay what appeared to be an island, seemingly floating upon the water. And the crew suddenly fell silent as of to keep from frightening it away. 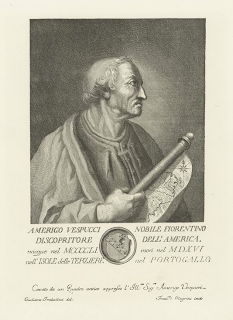 As they drew nearer to the island, they became more verbal until their voices erupted into a din of cheers and laughter. Those who were about to abandon all hope had made landfall in the New World. They were welcomed by brown-skinned people on an island which later became known as San Salvador.   Upon seing the natives, Columbus was convinced by their physical appearance that he had finally reached India and, as a result, referred to the natives a "Indians."
About seven years later (1499), another Italian, who happened to be a friend and colleague of Columbus, also sailed the ocean blue. He was Amerigo Vespucci of Florence. And he also sailed westward and landed in what he referred to as the New World. However, Amerigo did not believe that the land discovered by Christopher Columbus was India, but a new continent.
Waldseemuller mistakenly thought at that time that it was Amerigo Vespucci who first discovered the New World in 1499. In so believing, the maps, globes and books of that time had been printed with the name “America,” giving credit for the discovery of the New World to the other Italian (Amerigo Vespucci) instead of Christopher Columbus. Since Columbus claimed to have landed in India, and Vespucci claimed to have landed in a new continent, Waldseemuller, in good faith, printed the name “America” on all the maps and books, not realizing until it was too late, that Columbus had arrived there first. 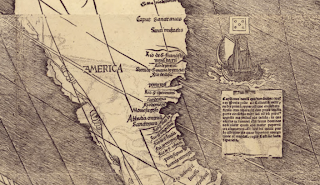 Now, Waldseemuller found himself in a terrible predicament. There were many who protested this error, demanding that the mistake be rectified. And although attempts were made to change the printed matter to give credit to Columbus, the damage had already been done. We must remember that at that time, they didn’t have the luxury of television breaking news, which might have cleared up the mistake in a matter of days or even hours. News traveled very slowly, if at all. The material in circulation had already made its impression on the general public who continued to refer to the new world as “America,” and they weren’t about to change.
So what happened here? Let’s face it folks, some names have a tendency to stick no matter how much Teflon is applied. Columbus thought the natives were Indians and to this present day (over 500 years later) they are still called “Indians” even though they have never been anywhere near India. If Columbus had not insisted that he had landed in India, things may have turned out differently. Waldseemuller would have realized that Columbus landed in the New World seven years before Vespucci. Two massive continents would not have been named “America”. The inhabitants of those two continents would not have been called “Indians.” Waldseemuller would not have had to endure such professional embarrassment and Columbus would have received the honors he so justly deserved. In the end, Vespucci seems to be the only one who came up smelling like a rose.