A Day at the Fair 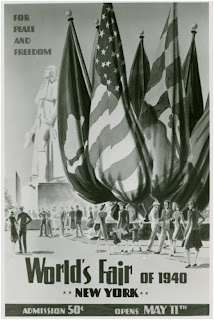 In the spring of 1940, the New York World’s Fair had been in progress for a year. I had heard a little about it, but never dreamed I would get to go there and actually see it for myself. Generally, we didn’t go to too many places, since the scarcity of money was always an issue. But one day, to my surprise, my father decided to take my mother and me to the fair. My mother packed a basket full of food to take with us. Fortunately, the New York City Transportation System made impossible dreams possible. The fair was located at Flushing Meadows in the borough of Queens and could be easily reached by subway. So early in the morning, we headed for the subway station. 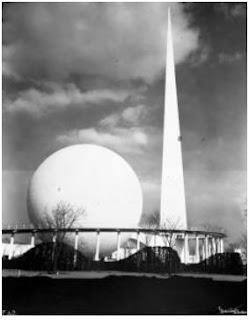 It was a wonderful experience. For me as a six-year-old, the fairgrounds seemed to extend as far as the eye could see. What I remember most was the fair’s thematic symbols of the Trylon, a kind of three-sided obelisk-looking structure and the Perisphere, resembling a giant ball. These symbols were visible from a few miles off and were the first things we saw through the windows as the train pulled in to the Flushing Meadows Station. The Trylon measured 700 feet in height. But the Perisphere was the most talked-about attraction because you could go inside of it and see things. It was a huge ball which measured eighteen stories high and 180 feet in diameter with a circumference of 628 feet.
We couldn’t afford to buy tickets to the Perisphere, but we were content to tour the fair grounds and take in the sights and free attractions. I remember the pavilion called “Frank Buck, Bring ‘em back alive.” I had heard a lot about Frank Buck. He was the wild game hunter who went to Africa and captured animals and brought them back to our zoos, but didn’t kill them, so I thought that was good. Of course it never occurred to me at that time, that he would be kidnapping animals from their homes and imprisoning them for the rest of their lives. But what does a six-year-old know?
As we continued to tour, the fairgrounds became quite crowded. While holding my father’s hand, I spotted an attractive looking card on the ground and I stooped down to pick it up. My father, tugged at my arm and said, “You shouldn’t pick anything up from the ground. Throw it away.”
“But I like it,” I said, showing it to him. When he saw what I had picked up, he realized it was a ticket admitting one adult to the Perisphere. He looked around for someone who might be searching for the lost ticket, but the grounds were so crowded, we couldn’t possibly know who dropped it. So we rested on a park bench to decide what to do with the ticket. My mother suggested my father use the ticket while she waited outside, since he was much better at understanding the English language than she.
We were about to share the imaginations of the futurists who put it all together. My father picked me up in his arms and we entered the Perisphere. I remember it being quite dark with lights on a kind of stage where everyone was being shown an ultra-modern way of life. There were fancy cars and trains which looked like bullets on wheels and large spacious houses with strange-looking furniture all of this and more as the announcer talked about the world of tomorrow. The Perisphere was the greatest attraction of the entire fair and took most of our day. When we came out, we resumed walking the fairgrounds with my mother. 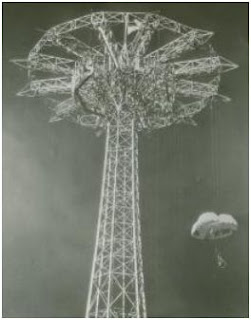 But there were many other attractions throughout the fair grounds, such as the Life Saver parachute jump where riders were belted into a two-person canvas seat hanging below the closed chute, then hoisted 250 feet to the top, where a release mechanism would drop them. Their descent was slowed by the parachute, then shock absorbers at the bottom, cushioned the landing. We watched several riders being dropped from the top. And as I watched this phenomenon, I said to myself, “They must be crazy. I would never do that.”  The day was coming to a close and it was time to catch the train for the return trip home. It was dark now and from the window we got our last look at the Fair’s thematic symbol, illuminated with hundreds of flood lights for us and for the world to get its last look as the train slowly pulled away from the station. My father told me to wave goodbye to the World’s Fair and I did.  In 1941, after the close of the World’s Fair, the parachute jump was moved to the Steeplechase Amusement Park at Coney Island. In the ensuing years, I had occasion to see the parachute jump whenever I visited Coney Island but I never gave it much thought. But one night, when I was out with some of my buddies having a few drinks, I decided to ride the parachute jump. I was about nineteen at the time and full of vinegar and that other stuff when I rode it to the top. It was a blast and not easily forgotten. I liked it so much that I rode it several times. And I’m glad I did, because in 1968 the ride ceased to be operational. To this day, the 262 ft structure, which weighs 170 tons, remains as a landmark in Coney Island. It was later dubbed by the local citizenry The Eiffel Tower of Brooklyn. The parachute jump is the last remnant of the 1939-1940 World’s Fair. It is also the last remaining trace of that single day in my life which endures as a special memory.