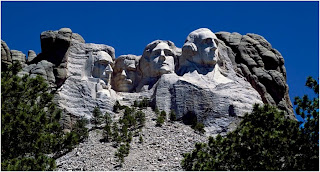 When Luigi Del Bianco was seven years old, he came across a number of brochures related to Mount Rushmore which contained photographs of four great United States presidents carved in the side of a mountain. When he asked his mother about them, she explained that his grandfather, also named Luigi Del Bianco, was the chief stone carver of this great monument. The little boy was stunned and proud at the same time. He was known to be very shy, but the news of his grandfather somehow gave him confidence. The second grader, who would never think of getting up before his classmates to speak, suddenly possessed a courage he had never known and seriously considered the prospect of participating in “show and tell” at school. With his mother’s revelation came also an unquenchable thirst for knowledge of someone he knew only as Grandpa. He would embark upon a quest which would carry him well into adulthood, fueled by a desire to enter the world of a man who would prove to be bigger than life. 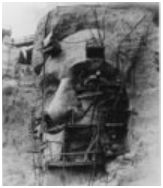 In the future, young Luigi would learn that Grandfather Luigi was 11 years of age when his father Vincenzo first noticed his son’s talent for wood carving. Vincenzo, who maintained a wood carving shop in Meduno, a small town in the region of Friuli-Venezia Giulia, Italy, sent the boy to Vienna and later to Venice to study the art of stone carving. When Grandfather Del Bianco was about 17, he received word from his cousin in Vermont that stone carvers were needed in America. Eventually, he met the Mount Rushmore designer Gutzon Borglum who, after observing Del Bianco and becoming acquainted with his work, hired him as chief stone carver of the Mount Rushmore National Memorial. It was Del Bianco’s responsibility to carve what was called the “refinement of expression” of the faces of the four presidents. This meant that the expression of each president’s face had to be carved precisely as they appeared in life.

It was not likely that young Luigi, at such a tender age, understood and appreciated fully the significance of his grandfather’s work. Grandfather Luigi had to study and internalize all aspects of the faces of Washington, Jefferson, Roosevelt and Lincoln, faces which could not be left to the imagination. During the lifetime of these men, there had been paintings and photographs of them and the carving of their precise likeness rested solely in Del Bianco’s hands. He was able to do this because he possessed a keen sense of observation, memory and knowledge, all of which came together to carve the necessary life-like details. But there was one additional challenge: Each face measured 60 feet in height. He was required to work several hundred feet off the ground on the side of a mountain which was half the height of the Empire State Building and his work had to be precise, for there was no replacing this mountain with another because of a mistake.

Del Bianco’s employer Gutzon Borglum often went to Del Bianco for technical advice on certain aspects of the project and often praised Del Bianco, referring to him as "…the most intelligent and efficient stone carver on the work who understands the language of the sculptor.” Borglum was also heard to say that “He (Del Bianco) entirely outclassed everyone on the hill and his knowledge was an embarrassment to their amateur efforts and lack of knowledge, lack of experience and lack of judgment”.

Young Luigi would also learn that, for reasons unknown, many authors of the Mount Rushmore experience had chosen not to mention in their books, his grandfather’s work and his many contributions to the project, despite the accolades showered upon him by his employer. Grandfather Del Bianco was also shunned by many in South Dakota. Whether it was due to his Italian ethnicity or perhaps envy of his superior skills as an artist is uncertain, but Del Bianco was unshaken by it. Grandfather Del Bianco managed to form a special bond with the Sioux Indians even to the extent of becoming a "blood brother" to them and was often known to show off the scar on his thumb as proof of that brotherhood. It was said that they got along so well because they were considered to be outsiders. Del Bianco would often cook pasta dishes to share with the Indians and they loved him for it, but mostly, they loved him for the fact that he treated them as human beings.

In the years to come, young Luigi would learn all of these things and more about his grandfather. But for the present, he needed to get ready to share with his classmates what little information he had. The next day at school, he was ready to get up before the class during “show and tell” and let them know what a wonderful man his grandfather was. He sat at his desk waiting patiently. Suddenly, it was his turn. He took his place in the front of the room and looked out over a sea of faces looking back at him. The room was hushed and he was nervous but with his new found courage he began to speak…“I would like to tell you about my grandpa….”