If the Romans Could See Us Now...

It was the summer of 1990 when my wife Marie and I again found ourselves in Rome. We had visited Italy several times before and usually made it a practice to stay at a different Pensione (bed and breakfast) each time.
In Rome, they bake a kind of dinner roll which seems to be made up entirely of outer crust with a hollow inside and is the most delicious tasting bread we’ve ever had.  This type of bread seems to be limited to the region of Lazio, where Rome is located, because we were never able to find it anywhere else in Italy.  We enjoyed the rolls so much that we usually filled up on them with cappuccino and gave no consideration to other foods on the breakfast menu.
On this trip, we had planned to have lunch at the Roman Forum. Of course, we knew that there were no restaurants at the Roman Forum, but that’s what made it fun.  It was kind of like having breakfast at Tiffany’s: if you want to eat, you have to bring your own food. We got the idea from a travel book and decided to act on it.  So, after breakfast, we headed for a neighborhood grocery store to purchase our lunch. 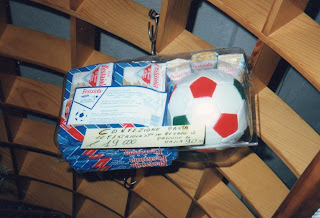 When we entered the store, we noticed a number of sack nets hanging from the ceiling.  Each contained a soccer ball and a couple of boxes of pasta and jars of tomato sauce.  They were displayed as a special sale in celebration of the World Cup of Soccer which Italy happened to be hosting that year.  If you bought the soccer ball, the pasta and sauce came with it or vice-versa.  Neither Marie nor I were in the market for a soccer ball or for uncooked pasta, but we found the display amusing just the same. We stocked up on salami, pecorino romano cheese, black olives, some of those great rolls, a bottle of wine and a bottle of acqua minerale.
After packing all of our purchases in my backpack, we headed for the Foro Romano to immerse ourselves in an atmosphere of Roman antiquity.  We toured buildings and monuments, one after another, using the limited time we had in Rome to savor all we could of this ancient civilization.  We were gripped with wonder at this strange phenomenon in which we found ourselves. Here we were in the midst of the skeletal remains of a society long past while all around us the sounds of modern traffic moved in every direction on the streets of modern Rome. We spent hours strolling along one ancient thoroughfare after another until we grew tired and found a shady spot to rest and have lunch.
By then, it was about one o’clock in the afternoon and there was very little traffic noise since most Romans were home taking their mid-day after-lunch nap.  We sat there enjoying a leisurely lunch, sipping wine and acqua minerale and wondering if any famous ghosts were keeping us company as we ate.
After a couple more hours, we left the forum and, instead of taking the bus, we decided to walk back to our pensione.  Banners and posters along the way were a constant reminder that Italy was hosting the World Cup of Soccer.  And as a result of this great event, the mood in Rome was festive and I wondered what the ancient Romans would have thought of all this.  When we got back to the pensione we packed our bags for the next day’s our trip south.
Our seagoing train trip was a plan formulated in Los Angeles after attending several festive functions at the Casa Italiana, the banquet hall of Saint Peter Church on Broadway.  Marie and I listened to the other guests at our table telling of their travels to Sicily by train and describing how, upon arrival in Calabria, the train cars had been uncoupled and placed side by side on a ferry which transported them to Messina where the train was reassembled for the completion of their journey.  So, the inspiration to make this seagoing train-trip came from these pleasant strangers with whom we had been dining.
We boarded the train at Stazione Termini in Rome to travel south to the province of Agrigento, Sicily.  After boarding the train and locating our bedroom compartment, we settled back and for several hours enjoyed the ever changing Italian landscape until daylight faded into black and we had succumbed to the exhaustion of the day’s activities, falling asleep to the rocking motion of the train as it made its way toward Calabria. 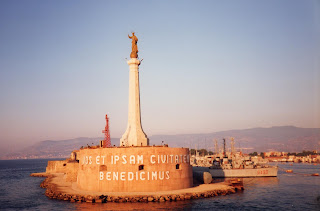 It was about 4:30 in the morning when I was awakened by the silence and stillness of the train.  I brushed aside the curtains to see the other cars along side of us.  Apparently, while we slept, the train cars had already been uncoupled and placed side by side onto the ferry bound for Messina.  I couldn’t contain my excitement.  As for Marie, she was happy to lock herself in the room and get back to sleep while I ran up to the top deck to observe our approach to Messina.  The forty-five minute ride seemed a fleeting moment, but I savored every minute, wishing it would last forever.
Ahead of me, I could see the Lanterina di San Rainieri lighthouse and the statue of La Donna della Lettera which stands 60 feet high on a pedestal of 180 feet.  Below is inscribed the words, “VOS ET IPSAM CIVITATEM BENEDICIMUS” (We bless you and your city).  It was a sight to behold.
For me, the experience of being transported by train which boarded a ferry and crossed the Strait of Messina into Sicily was one designed to produce indelible memories.  Marie and I had taken many train trips in the past, but one such as this, would prove to be a unique experience.  I learned that the ferry service dated back to 1886 after the railway first made its appearance in southern Italy.  Today, twelve ferries travel back and forth across the Strait of Messina carrying passengers and cars.
But this rendezvous with happiness I was enjoying was destined to be short-lived and its pleasurable sweetness would soon be marked by an element of bitterness because I was soon to learn that this seagoing train was rushing head-long into the end of an era.
For centuries, many have dreamed of a quick way to cross the Strait of Messina. The Romans wrestled with the idea of building a floating bridge of boats and barrels across the strait as did the Norman rulers.  In the 1930’s, Benito Mussolini considered the possibility of such a bridge, although no work was ever initiated.  But these were merely ideas which got no further than the spoken word. For the longest time, there existed an on-again/off-again tug-of-war in the Italian government with regard to the building of possibly the world’s largest suspension bridge.
If such a bridge were to be built, it would be the superlative of bridges, over three kilometers (two miles) in length with two great towers or pillars, the biggest ever built, each one exceeding the height of New York City’s Empire State Building.  This bridge would surpass even the Akashi-Kaikyo Bridge of Japan.
In conjunction with the suspension cables, the towers would support two and a half miles of roadway from the western tip of the Italian mainland in Calabria to the east coast of Sicily in Messina with traffic lanes for trains, motor vehicles, pedestrians and emergency services.  The projected time for completion is expected to be eleven years and the bridge is expected to be of service for 200 years.  It is expected to create 1,000 new jobs, boost tourism, and improve transportation between Sicily and the mainland.  Sadly, of course, the ferry would be eliminated.
Those who oppose this endeavor question Italy’s ability to pay for it, citing a price tag which began around two or three billion Euros during the planning stages and eventually escalated to 6.1 billion.   Aside from the money factor, there are those who question the wisdom of building a bridge of such dimensions in a region prone to earthquakes and fierce winds, but its proponents claim that the bridge would be built to withstand a tremor of 7.1 on the Richter scale and that the aerodynamic features of the bridge would allow it to withstand winds of up to 134 miles per hour.
In response, opponents argue that there is no guarantee that the next earthquake or one a few years down the road will not exceed a 7.1 tremor.  They argued also that winds are by nature unpredictable and may very well exceed 134 miles per hour speeds, possibly 150 to 160 miles per hour.  Strangely enough, throughout the discussions on the matter, it is unclear if anyone had mentioned the fact that the Messina earthquake of 1908 had measured a tremor of 7.2.
When I first heard the news of the project, the plans to build the bridge were already moving forward while a volley of controversy continued back and forth, between the pros and the cons, like a bouncing tennis ball and romantics, such as Marie and I, were prematurely suffering the pangs of nostalgia for a ferry which had not yet been sacrificed to progress.
As of this writing, many questions have still not been resolved and the final plan has not been put into effect. Construction on the bridge was supposed to have started in December, 2011. In our present economic climate, however, many doubt the bridge will ever be built.
So, perhaps there is still hope for romantics who relate more warmly to ferries than to bridges.  Nel fra tempo, che sarà, sarà!
Posted by Salvatore DiVita
Email ThisBlogThis!Share to TwitterShare to FacebookShare to Pinterest
Labels: History, Italy