Before the nineteenth century became the twentieth, many tenement buildings in New York City were built as five-story walk-ups. They were known as cold-water flats and became home to thousands of immigrants such as my Sicilian parents, who occupied a top floor tenement flat. 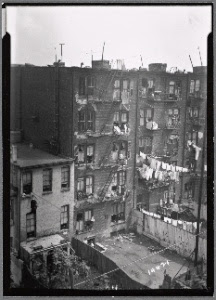 [Image from the NYPL Digital Gallery of The New York Public Library.]