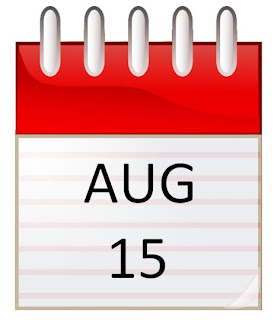 There is a time of the year in Italy when it seems as though all Italians have fallen off the earth.  Practically every town in this blessed land seems deserted.  For those tourists visiting Italy around August 15th, the experience can be mind-boggling.   It is a time when most Italians take a holiday and much of industry and commerce is at a standstill.  It has been said, I’m sure with some exaggeration, that during Ferragosto, the streets are so deserted in Italy that one can shoot a cannon down the main street of any town without hitting anything.

The fifteenth day of August is actually two holidays in one.  The first has its roots dating back a couple of millennia to the Romans who adopted this once pagan celebration from the Syrians, who were honoring Atagartis, a mother goddess who oversaw fertility and work in the fields.  By the time Caesar Augustus came to power, he expanded it to cover the entire month of August, calling it Feriae Augusti, which means, Fairs of the Emperor Augustus.  It consisted of a series of celebrations dedicated to the Goddess Diana who oversaw the woods, the phases of the moon and maternity.
The words, Feriae Augusti, were eventually contracted into the single word, Ferragosto, which, for Italians, signifies a short break from the hot sweltering summer.   The question often asked is, “If they all leave town, where do they go?”  Well, most Italians go to the sea shore.  However, some go to the mountains, but rest assured, all of them at one time or another, spend a considerable amount of time on the highways leading out of town because every artery is jam packed with cars.   And yet, the Italians are not discouraged by gli ingorghi stradali (traffic jams), since the practice continues from one year to the next.  During this holiday, Italy can rightfully boast of having the world’s longest parking lots.
The second part of this holiday occurred sometime during the 18th century.  It was at that time the Roman Catholic Church got into the act and declared August 15th the day of Assumption, but it wasn’t until 1950 that it was formally proclaimed by Pope Pius XII as a day of obligation, because it is the day the Virgin Mary was Assunta in Cielo, meaning, Assumed into Heaven.  In other words, Mary was transported directly to heaven to be with her son Jesus.  As a result of this proclamation, Ferragosto had to move over to make room for l’Assunzione, which gave the Italians an additional reason to celebrate. For me personally, hearing the name Assunta, gives me pause and I think of a gentle woman whom I loved in my childhood.    She was my Zia Assunta, and I didn’t realize, until recently, the significance of this great lady’s name.
Although the original holiday was devoted to different gods for different favors by different cultures, the concept, to some extent, maintains its originality, which is a celebration at the end of the hard labor in the fields. English speakers should find the word “Feriae” interesting, since it is the origin of the word “fair”, as in state or county fair, an event to celebrate the completion of the harvest. Fairs take place in many parts of the world, and are similar to the one we have here in Los Angeles County each year, same word, same idea. Buon Ferragosto!