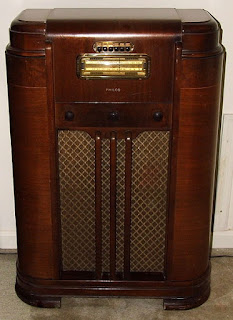 It was September of 1939, when my family moved from the tenements of the lower east side of Manhattan to an apartment in Brooklyn.  Shortly after the move, we experienced a milestone in our lives.  My father had purchased a Philco radio. It was a console which stood about four feet high and built entirely of wood with a glossy finish which emphasized the beauty of its natural rich grain.  I’m not sure how much money my father paid for it, probably sixty or seventy dollars which, to me, seemed like all the money in the world.
There were six buttons lined up under the dial.  The buttons illuminated the most popular New York City radio stations.  If I wanted to change stations, I could do it by simply pressing a button and not bother with having to turn the knob.  It was wonderful. It was the future.

The stories I heard from the radio were like reading without having to read. It was like watching a movie in my head as I listened.  Sounds turned into pictures. There was drama with music and narration and dialogue and sounds of things happening, placing me in the midst of it all.  Everything that came through the speaker directed my mind to see all that needed to be seen.

There were sounds of storms and howling winds and footsteps and doors opening and closing.  Sometimes I heard voices of characters and decided what they looked like and how they were dressed.  I saw them get into cars and start them up and drive off away from me, the sounds of engines fading into the distance.  Other times I saw cop cars with blaring sirens, chasing robbers and I would get caught up in the excitement with their shouts and screams and the screeching of tires and a narrator warning me of a sharp turn ahead on a dangerous curve near the edge of a cliff and ending it all with a crash.

There were stories of mystery and suspense which terrified me with sounds of the creaking door of a house, old, dark, dusty and dreary with ominous eerie organ music coming from nowhere. There were cobwebs and the feel of bone-chilling puffs of wind on the back of my neck and a sudden clap of thunder which caused me to imagine lightning as well.  Sometimes, the sounds I heard placed me in a frontier town of the old west, where an approaching stage coach and neighing horses came to a slow clip-clop, blending sounds with a myriad of voices of town folks, welcoming travelers.

I was sometimes on horseback with cowboys who rode in from the range and got off their horses and I heard boots on wooden boards walking toward the sound of a clinking piano which got louder as we entered the saloon. I recognized all the characters by voice, the cowboys and the gun slinger, the old prospector, the town marshal and the bar keep.
There were stories upon stories, narrating pictures, seemingly without limit. These were but a few of the sounds which came through the speaker of the Philco radio to prod our imaginations and transport us from Brooklyn to other places.

My brothers and I loved comedy as well and liked listening to programs such as Abbott and Costello, Adventures of Ozzie and Harriet, Baby Snooks, Blondie and Fibber McGee and Molly.  The Philco brought us the big bands playing tunes like Chattanooga Choo Choo and String of Pearls and I Don’t Want to Set the World on Fire and Elmer’s Tune and Amapola, but my all-time favorite was Oh Johnny, Oh Johnny, How You Can Love, sung by Bonnie Baker.  Never having seen Bonnie Baker, I could only imagine what she looked like and even at my young age, my image of her could set the pituitary gland working overtime.

The year 1941 was drawing to a close and we had been living in Brooklyn for two years. My mother had prepared an outstanding Thanksgiving turkey feast, but my thoughts were on Christmas.  Christmas meant a Christmas tree with a nativity scene including a manger and presents.  Just the mere anticipation of Christmas made the Christmas season seem that much longer and more enjoyable.  We were looking forward to a splendid Christmas with a house full of relatives.  And, of course, we looked forward to welcoming the New Year as well, but then something happened.

On the first Sunday in December, about two or two-thirty in the afternoon, there seemed to be some kind of commotion outside our building and in the hallways: the neighbors sounded excited about something.  They shouted words I had never heard before, words like “Pearl Harbor” and “Japanese.”  We were barely able to understand it all, but apparently something bad had happened at a place called Pearl Harbor.  We immediately turned on the Philco and listened to the news bulletin announcing the attack on Pearl Harbor by planes from Japan. 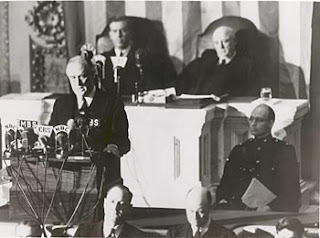 The very next day we listened to what became known as the Day of Infamy Speech, delivered to Congress by President Franklin Delano Roosevelt as he described the deliberate attack on Pearl Harbor by naval and air forces of the Empire of Japan.  Needless to say, our up-coming Christmas season was less merry and less happy than we had anticipated.  Our Philco, credited with bringing so much joy and entertainment to us in the form of drama, laughter and music, now delivered a bitter taste of reality as well and we entered the year 1942 immersed in a state of war.

The declaration of war by the United States against Japan, in a sense, turned the page to a new chapter in our lives and radio stations began focusing their programs on the war effort.  Our Philco now began filling the house with songs such as, Don’t Sit Under the Apple Tree, Say a Prayer for the Boys Over There, We Did it Before and We Can Do it Again, There’ll be Blue Birds Over the White Cliffs of Dover, When the Lights go on Again All Over the World, and I’ll be Home for Christmas, and that was just a few.  America loved a song with a message, so when the song, Praise the Lord and Pass the Ammunition,  hit the airwaves, the nation heard it as a call to duty as did my two oldest brothers who left home for Europe and the South Pacific.