Requiem for a Lady

It was a Tuesday, December 4, 2012, when members of the Whittier community came together to honor Dorothea Boyd, a gracious lady who had given so much of herself and who filled every day with life. My wife and I and some friends filed into the Ruth B. Shannon Center and went toward a section of seats located close to the stage. There seemed to be a number of seats available in the first row and I think we would have preferred to sit there, but for some unknown reason, we didn’t. Instead, we settled for the third row. People continued filing into the auditorium, but no one approached those choice seats. They were not roped off nor was there a sign indicating that they were reserved. I personally felt a sense of foreboding and consequently, avoided them. Perhaps others felt as I did, because they remained unoccupied throughout the evening. 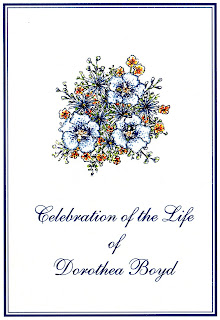 The program began with a welcome and introductions by various speakers as well as a greeting from Dorothea’s family. There were eulogies and anecdotes and with each speaker I learned more about this woman with the delightful Australian accent. Many people spoke of how determined she was to get things done and how she was known as the go-to person who made things happen. And her wish to have her memorial at the Ruth B. Shannon Center did not escape the notice of those who knew her and eulogized her and who were obviously pleased that her wish was coming to pass even as they spoke.
As I sat in the auditorium, I thought back on my first meeting with Dorothea. It was at First Friends Church when I became a member of the writing group which met there each week. Dorothea and I had spoken several times and I think at least twice, the subject centered on the song, Waltzing Matilda. I had always been fond of that song and after meeting Dorothea and speaking with her it became a matter of the song reminding me of the lady and the lady reminding me of the song. I found Waltzing Matilda to be a pleasingly haunting song, which one should avoid hearing first thing in the morning if one does not plan to spend the day with it.
The memorial’s program progressed from one segment to another, interspersed with eulogies and anecdotes and accolades on Dorothea’s behalf by so many: And there were, as well, offerings by musicians who filled the hall with their gifts.
As I sat there in the auditorium reviewing the memorial’s program, I was pleased to see that Waltzing Matilda would be part of it: And I thought, how could it not?
Then finally, near the end of the program, came the members of Chorale BelCanto who were about to leave with me an indelible memory of a very fine lady whom I wished I had known better.
They sang a rendition of Waltzing Matilda which far surpassed any that I had heard previously. Sung in a style of an a cappella four-part harmony, their voices filled the hall with aesthetic brilliance. This simple Australian folk song of rustic elegance was sung with such harmonic precision and balance as to have a disarming effect on at least one member of the audience who was moved to tearful pleasure.
It was then that I came to realize what was happening: She was there! Dorothea was there with us in the auditorium. After all I had heard of the things this lady was capable of accomplishing, I wouldn’t put it past her. She was somehow able to keep those five front-row seats unoccupied and there she was, in the center of them, not alone of course, because true to her gracious character, she had also invited several of her old friends to join her.
Now I realize that the weight of evidence in the case I present leans heavily towards faith; so those of an agnostic temperament might assert the uncertainty of my claim. And I cannot say that I actually saw her because I didn’t. But I knew! In my heart of hearts, I just knew that the Ruth B. Shannon Center was filled with more than a mere tangible audience. It was a memorial both temporal and spiritual, which may have gone unnoticed by those unaware of the presence of the guest of honor and her friends seated in five seemingly unoccupied front-row seats, in an otherwise packed house. It had to have been just as I claim. From what I have learned of Dorothea’s personality, she would not have missed it for the world and true to form, she went out with grace and with dignity and with style.

[Article by Salvatore DiVita  -  all rights reserved. This essay first appeared in Once Upon a Time: With or Without Classic Rhyme, the 2013 publication of the Memoir Writing Group, Whittier, California.]

[Photo of cover of memorial program in the author's collection]

Posted by Salvatore DiVita
Email ThisBlogThis!Share to TwitterShare to FacebookShare to Pinterest