The first coffee house in Europe opened in Venice, Italy in 1647 and, so far as anyone can tell, it took over a century to get there from its place of origin. To explain, we need to go back to fifteenth century Ethiopia.  It was there that a young goat herder was tending his goats and happened to notice that some of the goats were chewing some red berries, which were growing on a wild bush. 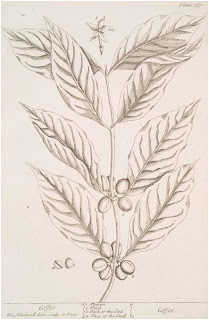 The goat herder at first gave little thought to what his goats were doing, until he noticed their strange behavior, romping and prancing about with a degree of energy he had never seen before.  Such unusual behavior in his goats prompted him to wonder if the red berries had anything to do with their new found energy.  When he chewed some of the berries, he found that they possessed a bitter taste with a slight element of sweetness.  The experience also left him energetically gratified, so much so that with his renewed energy, he picked a bunch of berries and ran home to his wife for a private show and tell.

The goat herder’s wife, being a religious sort, and highly suspicious of mind- or mood-altering substances, suggested they show the berries to the monks at the abbey.  Well, the monks were also a bit suspicious and were not willing to take any chances, especially after being told of the strange way in which the goats were behaving.  They decided to cast the “sinful” berries into a fire. What occurred next came as surprise to all: the roasting berries emitted a pleasant coffee aroma which gave the monks second thoughts about what they were doing.  Perhaps we’re making a mistake, they said.  So they raked the berries, now looking more like beans, out of the fire and into a pot of boiling water, allowing them to simmer.

The aroma of brewing coffee soon drew other monks to the boiling pot, curious to taste the heavenly brew.  In the past, they had experienced much difficulty staying awake during their all-night devotions but now they thanked God for this unexpected gift which would enable them to pray throughout the night.

Whether one believes this story or not, the fact is that, eventually, the popularity of coffee spread across the Middle East to Yemen, Arabia, Egypt and North Africa; by the sixteenth century, it reached Persia and Turkey.  From the Muslim world, European travelers returned with reports of this unusual black beverage, introducing it to Italy where it met with some opposition.

It seemed that there were some who were overly cautious about the use of coffee in the Christian world.  The local clergy condemned it.  The coffee controversy became so great that Pope Clement VIII was pressured by his advisers to declare coffee the "bitter invention of Satan" because of its popularity among Muslims and it being a sort of antithesis or substitute for wine which was used in the Eucharist.  What occurred next may be true or simply the product of someone’s vivid imagination.  But as the story goes, upon tasting the brew, Pope Clement declared that, "This devil's drink is so delicious...we should cheat the devil by baptizing it," and as such, gave it overwhelming Papal approval. 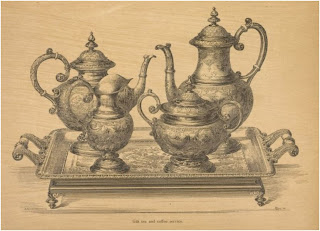 Today, coffee-drinking in Italy has become a unique experience.  With thousands of cafes and bars across the land, one can easily acquire a quick pick-me-up at any time of day, as many Italians do.  Italians enjoy drinking several varieties of coffee styles, a concept which some American commercial chains have “borrowed” and turned into big business in the United States.

There is espresso, small strong black coffee, nothing fancy, just black coffee. It is highly recommended that sugar be added. If you prefer to add a shot of alcohol to your espresso, it’s called caffè corretto.

Cappuccino is an espresso-based drink, featuring steamed frothy milk, often garnished with some type of ground spice, typically cinnamon or nutmeg. Cappuccino gets its name from the Franciscan friars who were known for wearing pointed hoods along with their habits. The word for "hood" in Italian is cappuccio, and is the origin of the word cappuccino, meaning small hood.  The first cappuccino coffee served had little peaks of milky foam that looked like little pointed hoods, hence the name, cappuccino.

Caffellatte is coffee with lots of milk.

The Italian word macchiare means to stain. Latte macchiato means milk stained with coffee – hot milk with just a bit of coffee. Caffè macchiato, on the other hand, is just the opposite: coffee with just a stain of milk.

When visiting Italy, I will occasionally try an espresso, with lots of sugar or a shot of anisette, though I much prefer what I’m used to, the milder American coffee. I have tried Italy’s version of “American coffee” and found it to be a disaster.

In their attempt to accommodate the American taste, Italians feature something called caffè Lungo – long coffee. As explained to me, the Barista lets the water pour from the machine until the coffee becomes weak and bitter. It is also called caffè americano – American coffee.  In private, the Italians call it acqua sporca or dirty water. This is quite understandable, because I tried caffè americano once in Milan and can attest to the fact that it had a definite dirty water flavor to it.  So, when I’m in Italy and have a craving for anything resembling American coffee, I simply order a cappuccino.

It is interesting to note, however, that customarily, Italians do not drink cappuccino after eleven in the morning.  They have been known to shake their heads and stare in amazement when Americans order cappuccino in the afternoon or evening, as though it were a sacrilege.  But Italians are slowly become accustomed to American tastes, realizing the importance of satisfying the desires of those who pay the bills.  So, when in Rome, don’t be intimidated into doing “as the Romans do.” Order a cappuccino in the afternoon if you like without guilt of violating the barista’s schedule.  Besides, it beats dirty water any day.