In my study of Italian language and culture, I encountered the words la vendemmia. According to the textbooks, la vendemmia means “the grape harvest” and describes a season during which vintners take to the vineyards to harvest grapes primarily for the purpose of making wine. Around that same time, I had seen some films on PBS television of the Italian country side which were absolutely beautiful to watch, complete with mandolin music in the background. I was intrigued by the idea of possibly taking part in an Italian grape harvest and thought it would be a unique experience. I could see no reason not to since I was retired and I knew Marie wouldn’t mind. Of course, it also doesn’t hurt to be married to a woman who spoils me rotten. After a phone call to my cousin, Francesco (the vintner), I made all necessary preparations and was off on a ten day trip to Sicily. By the time I arrived, I came to realize that jet lag is not only unforgiving, but upon a senior citizen, it descends with a vengeance. Francesco had planned to begin harvesting grapes in a few days which was just fine with me since it took me at least three days to master the art of keeping awake in the daytime. It also gave me the opportunity to visit and pay respects to relatives and friends.
On the first day of the harvest, I learned that many Sicilians do not maintain any set schedules. Nothing begins at a precise time. No one is in a hurry and nothing gets done until they’re ready to do it. The only thing which was not new to me was the heat. I found out that September is just as hot in Sicily as it is in California. Finally, three of us jumped in the truck and headed for the vineyard. Besides Francesco and me, there was Giacomo, Francisco’s brother-in law and childhood classmate.
Once at the vineyard, we started down one row and up the next. I soon learned that it was best to fill the baskets only half way, since they had to be carried to the truck and hoisted over to top. It makes quite a difference if you’re planning to spend any amount of time out there. My body soon reminded me that it had been a long time since I did any kind of manual labor. The perspiration poured out of me and I hoped for even the slightest breeze, but none came. It was hot and the work was hard but there I was in a Sicilian vineyard harvesting grapes alongside of two guys named Francesco and Giacomo. I was fulfilling a dream and thought, “It just doesn’t get any better than this, except that it would have been nice if there were a little mandolin music somewhere off in the distance.” Eventually, a few more family members came out to help and after several days, we were ready to make wine.
The grapes were crushed and pressed into a burgundy colored liquid, prettier and clearer than I had imagined. The wine was stored in huge barrels and while the natural fermentation process had begun, preparations were being made for a celebration dinner. There were relatives, friends, and neighbors, many of whom I had never met before. We laughed, sang and told jokes and the time just seemed to evaporate until eventually, we grew tired and quieter and a rooster, somewhere outside, reminded us of the lateness of the hour. Finally, we surrendered to fatigue and said, “Buona notte.”
I spent the next day packing and saying good-bye to the same people I had greeted when I arrived. After boarding the plane at Catania Airport, I took my seat and looked out the window as we took off. As the objects on the ground got progressively smaller, we approached Mount Etna. It seemed as though the pilot was purposely making a semicircle around the volcano, perhaps to give his passengers a better and longer view. A thin blanket of smoke, from a recent eruption, hovered between us and the volcano. 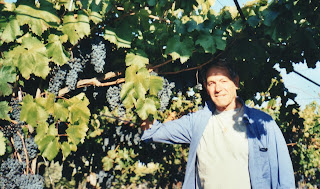 This was indeed a special treat which couldn’t have been better if I had planned it myself, because as I looked out over the Sicilian landscape, I was certain I heard the sound of mandolin music playing well above the roar of the engines. I thought how fortunate I was to be married to Marie, and how thankful I was for having been given these precious days to make wine in the land of my ancestors.
Posted by Salvatore DiVita
Email ThisBlogThis!Share to TwitterShare to FacebookShare to Pinterest
Labels: Italy, Memoirs