Among my first recollections as a child is a tenement building on East First Street, between First and Second Avenues, Manhattan, New York City, known as the lower eastside.
One of the fascinating attributes of New York City is the fact that you don’t have to travel very far to experience a culture different from your own, something I learned at a very young age. New York City had many sections of various ethnic groups who had a tendency to keep to themselves. We lived among many other Italians in our section, and we were familiar with our neighbors as well as our surroundings.
I have a strong image of the building in which we lived and I remember that it was directly across the street from a narrow park where men, who smoked skinny wrinkled cigars, played bocce and argued about the game in Italian. 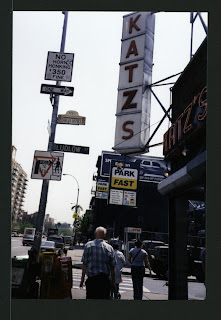 On the other side of the park was Houston Street, very wide and usually quite busy with traffic. I was probably three or four years of age when I somehow, miraculously, managed to cross Houston Street without being killed. I must have traveled east several blocks to the southwest corner of Houston and Ludlow Streets. I know that now, because I learned more of the terrain as I grew older but, at the time, I had no idea where I was. I had wandered too far and now I was lost, but I was too young to know that I was lost. I only remember that a wonderful aroma of food came out to greet me as I stood there on the sidewalk. The aroma may very well have been the deciding factor which compelled me to walk through the door of this little place called Katz’s Delicatessen.
A kindly man wearing an apron came out from behind the counter and asked me where I lived and if I was lost. I don’t remember what I told him, but he began to converse with another man and together they talked about me, back and forth, trying to decide what to do with me.
It’s possible that the kind man with the apron may have caught me staring at some of the customers while they ate at their tables because he gave me a salami sandwich on rye to eat and some kind of soda, probably root beer or celery tonic, I’m not sure. It may have been my first taste of soda and may also have been my first taste of Jewish salami. And when it came to eating rye bread, wow, it was quite different from any bread I had ever had before and I loved it. We didn’t get any of those things in our Italian household. I know one thing for certain: to this day I have never lost my craving for Jewish salami.
Everything was wonderful at Katz’s Delicatessen. I couldn’t complain about the service and everybody was so nice to me that I was ready to make it a permanent deal.
I sat there at the table eating my salami sandwich and living it up when the cops came in. They took me to the police station and when we got there I had another wonderful time. I remember the cops playing with me and giving me ice cream and lollypops. I have no idea how long I was there or how long it took the police to locate my parents, but there I was sitting behind the sergeant’s desk eating a lollypop when my mother and my sister, Antoinette, walked in through the door to claim me. Antoinette had to do all the talking because my mother spoke no English.
I wished I could have lived there at the police station. It was so much fun, but that was not to be. My mother and sister took me home. The adventure was over, but I never forgot Katz’s Delicatessen and at that young age, I secretly wondered if I could find the place again and tell them that I was lost. But even if I could find it, it would do me no good because, after that episode, my family would not let me out of their sight.
As I grew to maturity, I visited Katz’s Delicatessen a few times, once before the United States Army sent me to Korea and a few years later before I moved to California. I don’t know how many times I’ve told this story. It’s a memory that stays with me and one that I recount to anyone willing to listen.
In 2005, after visiting relatives in upstate New York, I drove my rental car down Second Avenue to Houston Street and turned left toward Ludlow Street. After circling the block a few times, I miraculously landed a parking space on Houston right outside of Katz’s Delicatessen. I got out of the car and looked at the spot where, sixty-seven years prior, I gazed into the little deli and absorbed the aroma which drew me in from the sidewalk.
The deli no longer had the ambience which I once knew. It was huge. The owners had apparently bought out adjoining properties and knocked down walls to expand the place to the demise of its informal, folksy quality. Today, the deli is more like a big cafeteria, quite different from the deli of days gone by.
I only recently learned that Katz’s Delicatessen was the site of Meg Ryan’s faked orgasm scene in the 1989 romantic comedy, When Harry Met Sally. In the scene, a woman (Estelle Reiner) who is seated at another table, is apparently mesmerized by Meg Ryan who is seated across the table from Billy Crystal and is seemingly in the throes of an inexplicable sexual orgasm. In response to what Ms. Reiner is observing, she tells the waiter, "I'll have what she's having.”
It seems that the table, at which Meg Ryan and Billy Crystal sat, is marked with a sign that says "Where Harry met Sally...hope you have what she had!"
A lot of time has gone by since my first visit to Katz’s Delicatessen and with the fleeting of time comes change. Our mind takes a photograph of what it last sees, and expects it to remain exactly as we had pictured it. And when it does not correspond with our memory, we suffer the pangs of an unreasonable desire to return home called nostalgia. The words of Thomas Wolf, “You Can’t Go Home Again,” have universal application, but regardless of all that has changed since I was a child, that which has not changed is my craving for Jewish salami.